A conversation with Patricia Thornley published on 3QuarksDaily 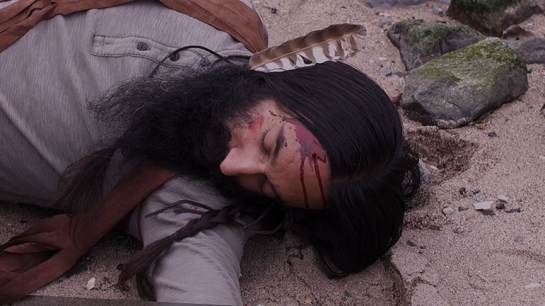 From November 17, Patricia Thornley’s work The Western, part of her series THIS IS US, is on view as part of the group exhibition “Empathy” at Smack Mellon Gallery in Brooklyn, New York. The project is the latest in a seven-year series of installation and single-channel video works consisting of interviews and performances. Previous videos of the series are An American in Bavaria (2011), Don’t Cry for Me (2013), and Sang Real (2015). As a whole, THIS IS US  formulates multiple parallel inquiries into the collaborative fantasies Americans enact through popular media. In the current political climate, as the escalation of social and economic forces impacting millions of lives is cast into increasingly sharp relief, these fantasies take on new urgency and, in many cases, a new absurdity.

The Western’s cast of characters consists of these Civil War-era archetypes: Indian Scout, Beast of Burden, Frontiersman, Savage, Deserter, Justice, and Drifter. The work is conceived as a two-part installation in which the cinematic trope of the Western is used as a framework for inquiring into the American psyche. In the exhibition space, a projected “movie” is installed opposite a wall of screens playing a series of interviews with the seven participating characters.

Andrea Scrima: Patricia, a few years ago I conducted an interview with you about a previous work of yours, Sang Real (2015), for the online poetry magazine Lute & Drum. Now, with The Western, the overall structure of THIS IS US is coming more and more clearly into focus. The last time we spoke at length about your series was a year and a half before the last presidential election. How have recent changes on the political landscape affected your approach to the themes in your work?

Patricia Thornley: From the beginning in the THIS IS US series, one of the questions I asked in my interviews with the people who featured in the individual videos was “how do you feel about being an American?” Historically, there’s always been a certain political disconnect at play with Americans, due to less armed conflict on our own soil and a certain comfort level.

I didn’t ask this question because I was trying to be instructive, but because one of the most important aspects of my work is to observe opposing and conflicting states of consciousness and to create situations that attempt a kind of uncommon reconciliation of these states. So in terms of what has changed I would say that what I was perceiving as a state of unconsciousness (pre-Trump) has been pushed to the surface by outrage and fear.

Read the interview on 3QuarksDaily here.