How many people have I hurt? And who is the woman I used to be? There was a time when everything that happened to me was new, when the carousel sparkled with tantalizing colors and I hadn’t yet begun noticing things in the background blurring by, the impassive faces of those who watch, but decline to take part. One more time around, and then another, and I began to detect patterns in things: the way I always notice the ring a moment too late to catch it, the way I sometimes remember the giddiness of jumping on and jumping off more vividly than the whirling ride itself: the price I’ve paid for my adventures, my seductions. 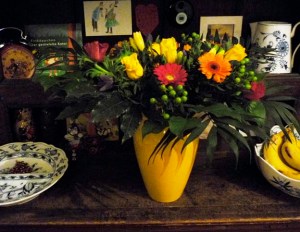 And what does this have to do with you? Are you there, just beyond reach, or will you vanish the moment I come looking for you? I write to retain something fleeting, render it real; I shore up sentences like a seawall against the annihilation that swells over me each night, against the panic upon awakening. I can dream, I have become proficient at that, but can I sustain a wakened state? Is there anything I can offer you besides my imagination?

I wrote it in jest: a demand that you come here today, my birthday. I, who am not capricious, actually imagined you would indulge me this one extravagance and appear, genie-like, at my door. You with your elderly mother, working throughout the night towards another deadline; and I, who am behind in everything: time should stop to let us climb the cliff together and duck into our secret magic fort. And already I have crossed a line and entered the land of need, left behind the masquerade to appear naked before you, although you may not have noticed—you who notice so much.

I have missed the cues so many times, a slipping into the past tense as though by chance, a slipping away behind reassurances. And I have been guilty of this too: backing out the door with a cautiously worded promise that collapses in on itself like the empty construct it is, designed to divert attention as I tiptoe away. It’s always so much easier to say what a person expects to hear: attempt the opposite and see how stubbornly they continue to understand what they want to be told.

Is it different this time? You sent me a recording, speaking to me in an Earth-to-A. way: I’m in a spaceship disguised as a coffee shop; there’s music in the background, there’s din all around me. I told you I loved your voice; you wondered if I would consider backspacing to the letter r.  I close my eyes and listen to it again and again, not quite ten seconds long, a digital garbling of an acoustic reality with its abbreviation of sound waves into staggered frequencies and its truncated background blips. All at once, I’m curious. I consult Wikipedia and read up on the physics of digital recording; I learn that sound is transcribed as a stream of discrete numbers representing changes in air pressure, an abstract sequence that is then reconstructed into analogue wave form. In terms of imagining your actual physical presence, this is less than reassuring. As my mind struggles with the concepts of dithering and signal-to-noise ratio, I marvel that a living body nonetheless begins to conglomerate around this information like a cluster of ghostly molecules; that behind this faintly robotic sound is the sonorous, self-assured, practiced voice of a former actor who really exists somewhere in London, who is really caring for his elderly, diva-like mother with a glittering, passionate past and an uncanny instinct for human nature, and my mind backspaces to the letter r for a man who is still licking his wounds over a failed marriage, no doubt giving in to the hope now and again that she, the mother of his child, will suddenly, miraculously change her mind and want him back. How could he not long for that—to be allowed to resume what he thought was a perfect life, with the perfect woman, in good times and in bad, committed and ready to give everything he had?

My mind strays; there’s mail again, an early birthday greeting from you, a declaration of—what? A promise to remember and cherish a “presence I gave you”—and this very act of slipping into the past tense (why not: have given?), this confusion of the preterit, progressive, and perfect, typical for native German speakers, triggers something I am barely aware of—and already I feel the dread in my breast that anticipated the last goodbye, the unfurling of an implosion. Careful analysis informs me that it’s in all likelihood a hallucination on my part, and yet I am afraid. How can we assess where we’ve been damaged when the parts we need to perceive this no longer function as they should?